As the Lines Blur Between Agencies and Consultancies, New Shops Are Taking a Hybrid Approach

THE FUTURE OF AGENCIES

As the Lines Blur Between Agencies and Consultancies, New Shops Are Taking a Hybrid Approach

Everything in marketing revolves around the client, and they’re driving changes.
After years of headlines about consultancies eating ad agencies’ lunches, the two groups are increasingly starting to look alike.

Since everything in marketing revolves around the client, it shouldn’t come as a surprise that they’re driving these changes.

Faced with new challenges in a rapidly evolving marketplace, clients are demanding a wider range of services in an attempt to adapt. As a result, consultancies are building up creative capabilities through acquisition and internal development, and traditional agencies are attempting to offer more consultative services. New entities are focusing on a hybrid approach.

“There’s probably more similarities than there are differences” in what Facebook looks for in agency and consultancy partners, said Patrick Harris, Facebook’s head of agency partnerships. “The role of a partner and intermediary becomes more important, not less important, as the market and ecosystem gets more complex.”

"Our model makes us more open to coming in to solve a problem, not sell an idea."
Seema Miller, president, Wolfgang

DDG president Justin Tobin explained that his boutique consultancy emerged from his experience as head of global digital strategy for American Express from 2004 to 2009.

In that role, Tobin found he was “frustrated with the type of external resources” available—caught between traditional consultancies that understood the business but were “very bottom-line focused” and creative agencies that “didn’t understand my business.”

Realizing that what he and other clients needed was something in between, he founded DDG as “a collective of independent founders, entrepreneurs and practitioners who are experts in a variety of fields across​ many business management disciplines, including marketing, talent, planning and operations.”

Tobin said there’s a need for companies that are trying to transform at the center of that graph, and it’s that center between traditionally consultative and creative services where agencies and consultancies are rushing to gain ground.

“Anyone who doesn’t recognize the need for the confluence of those things on the part of the client has their head in the sand,” Tobin added. 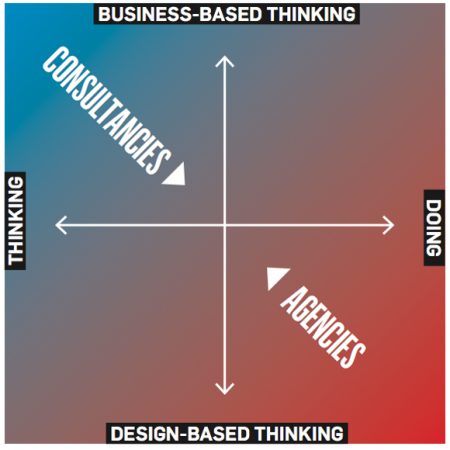 In Venice Beach, Calif., former David&Goliath executives launched Wolfgang in December 2016 as a creative consultancy and agency. After Panda Express named Wolfgang as agency of record, president Seema Miller said its model was resonating with clients.

“Our model makes us more open to coming in to solve a problem, not to sell an idea,” Miller said, adding that Wolfgang’s approach allows it to explore myriad strategic and creative solutions to clients’ demands and distill analytics down to executable insights. “When we present a strategic solution, it’s executable.”

TrueCar initially hired Wolfgang to consult on strategy, but it brought Wolfgang back to apply its initial strategic thinking to define a unified brand strategy, which evolved into a creative partnership.

“Wolfgang’s consultancy-agency model has allowed them to be extremely nimble and flexible in working with our in-house team,” TrueCar chief brand officer Lucas Donat said when the company selected Wolfgang to handle a rebranding assignment.

While Wolfgang is collaborating with TrueCar on the creative campaign, CCO Colin Jeffery explained that Wolfgang would have been open to handing things off to TrueCar’s internal creative team.

Wolfgang is also working with a startup in the travel/hotel space, helping to build the brand up from its inception, which Jeffery said was a unique relationship for them.

Facebook’s Harris explained that evolving client demand for different capabilities “is forcing, in many instances, consulting firms, agencies and companies all coming to the table at the same time” to ensure such clients derive maximum value from their partners.

“We sit in more rooms today where you have a consulting firm, you have an agency and you have us sitting at the table because clients are forcing it,” he said. “There’s a role for all of these partners to play.”